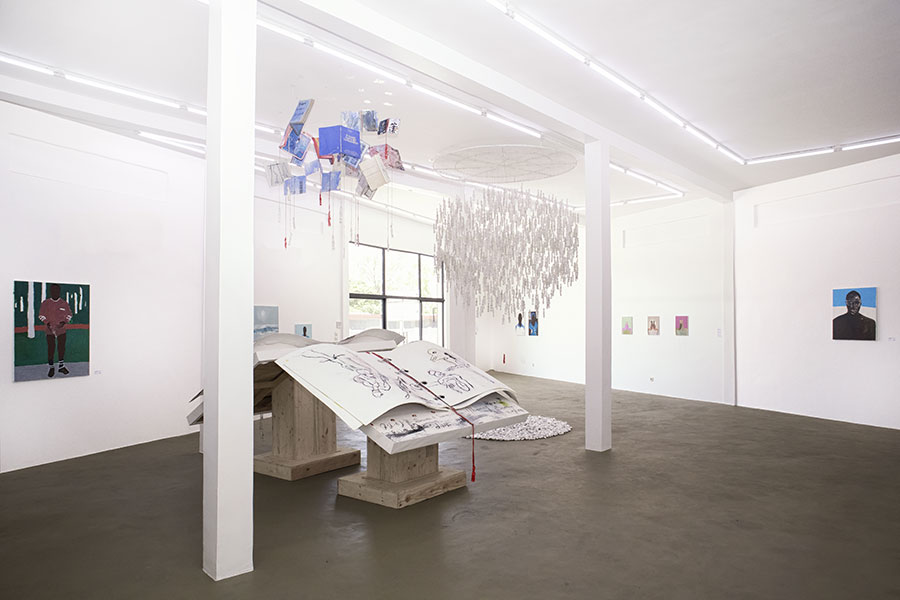 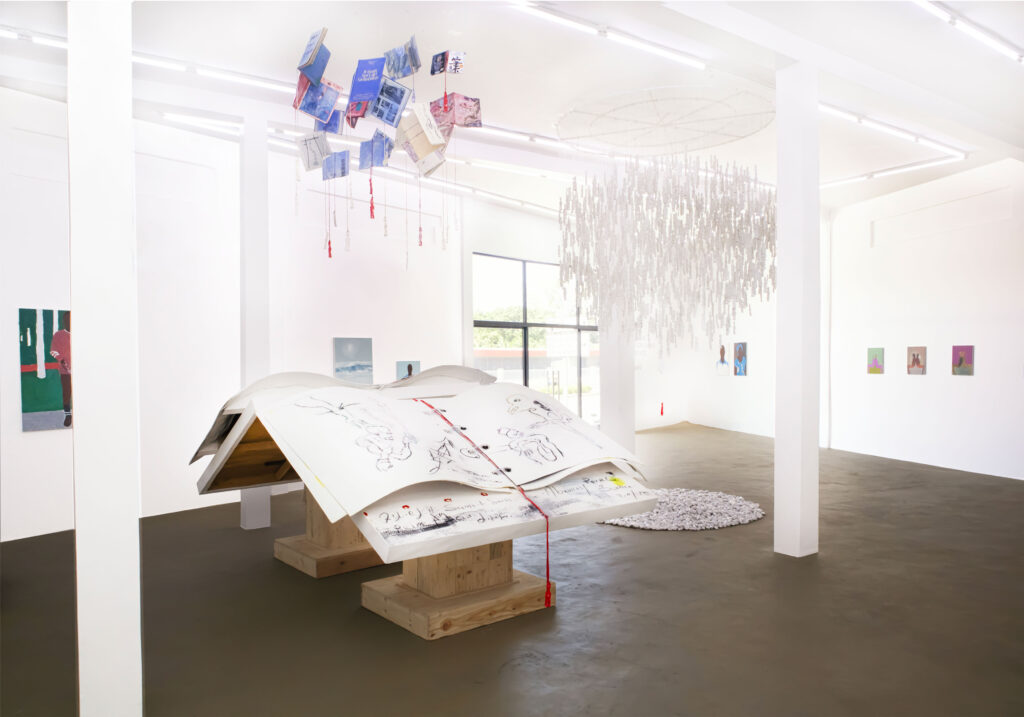 For the opening of our new space in Benin, SEPTIEME Gallery has chosen to explore our questioning of the in-between. This between-things, both of time and space, which undermines the lineages in place, which unsettles. This interspace which disturbs clearly marked paths, these straight lines that reassure us and structure the world.

Between Cotonou and Paris, SEPTIEME has decided to trace something that connects, perhaps a bridge, perhaps a thread? In this in-between lies an infinity of ways of being that will be realized exhibition after exhibition, in the dialogue between artists, beings, audiences and ideas.

But how to write the story of this interspace, which connects Paris to Cotonou, without adding a new layer of fragmentation; drawing a new line, adding a square to the grid, yet another border? The exploration of the in-between must remain faithful to the refusal to delimit, to the refusal to belong in its entirety, to the refusal to respond fully to the code, to the freedom to be one thing while being its other. How can SEPTIEME belong to two places, but to none, both engaged and detached, driven by this possibility to create anew?

AVIVÔ, fever in Fongbe, is a response by SEPTIEME to a proposal by Zinkpè. Fever, chosen as that which binds, that which connects, as that burning cloud which overflows, is that which exceeds the body. It
transmits and is transmitted, passes from one to the other. Invisible, it moves freely according to the elements it meets. Zinkpè, master of the art lands in Benin, invokes fever, calls to circumvent the contours to take with him those who have the fever to say, to sketch, the fever to create and propose through this collective exhibition alongside Joël Degbo, Gregory
Olympio and Didier Viodé, artists in the gallery since its opening in October 2019.

Fever can be burning, high, low, intense, moderate, strong or raging. It can develop, break, rise, pass, fall or fall again. Fever creates the joy of life, it is guilty of the folly of breaking rules. Fever inhabits and infects. This state of agitation, of revolt against the state of norm, tests the body and the spirit and nourishes the desire to create. We tremble, we sweat in our flesh and our thoughts to propose something new, a new perspective, a displacement. 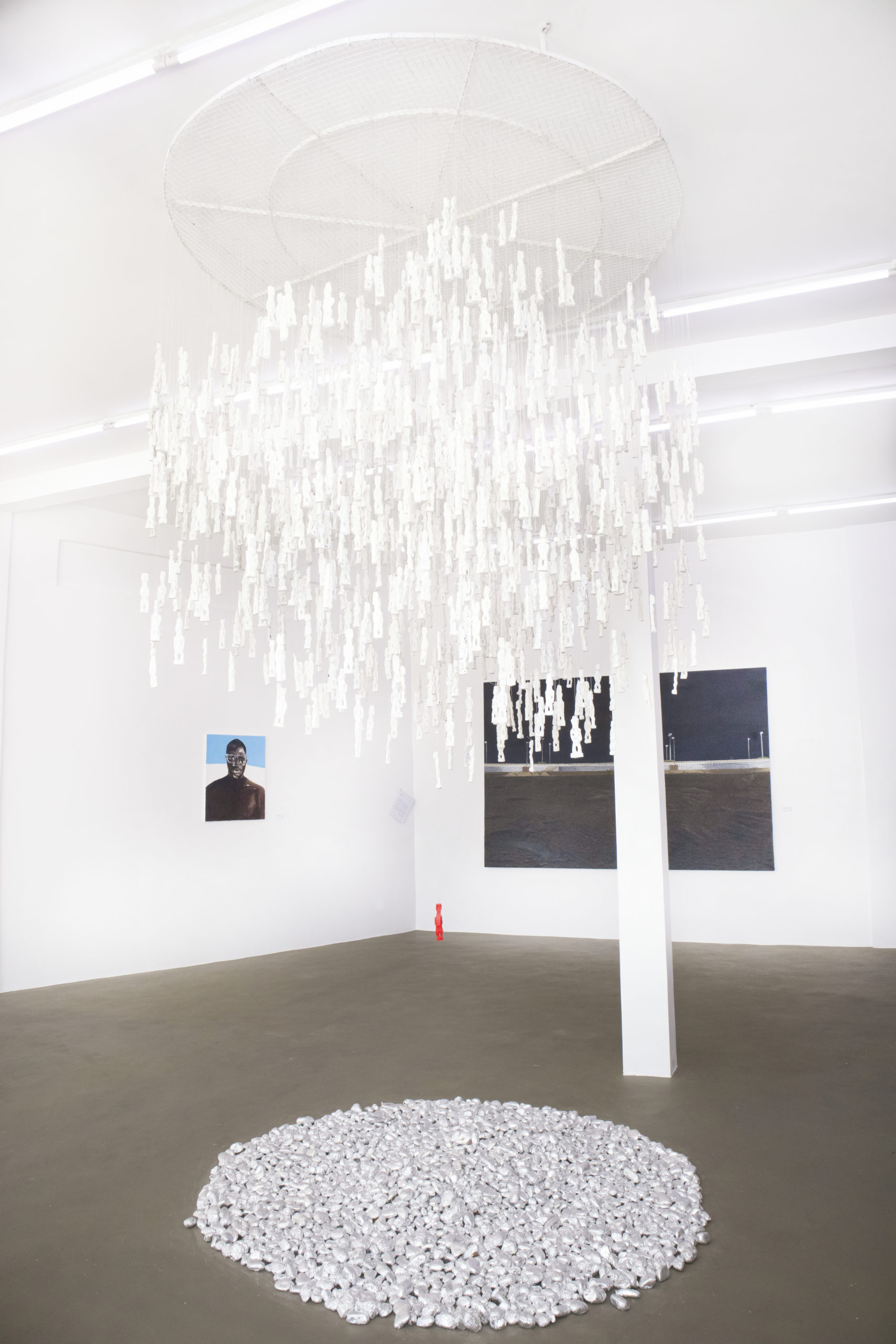 AVIVÔ is the proposal to connect four artists by a space, four artists joined by this fever to circulate, who attempt to override interior and exterior constraints, to be but fluid, diffuse, extended and vibrating clouds connecting the here and the elsewhere.

In AVIVÔ, fever is represented by the cloud. A light mass, of indecisive form, as if in suspension, the cloud is free to go into an infinite and indefinite space from which it can cleave every place. The permanent metamorphosis of the cloud, reminds us of the freedom to be and to become. Impossible to confine to a precise form, at the mercy of the winds and time, it deforms itself and represents perpetual renewal. Transformed, it is never the same as it was the previous moment, creating conditions for an impossible delimitation. Clouds are at the same time familiar, mysterious, visible and elusive, capable of hiding a part of the sky without obstructing the light.

Zinkpè gives substance to AVIVÔ with his eponymous installation. He offers us his own cloud, this globe of Ibeji statuettes that float together, creating billions of spaces between them without a line ever appearing. The statues spin. Never stable, they evoke uncertainty, the perhaps, in front of which no border can resist. The installation as a whole is thus subjected to the hazards of its environment – visitors, a breath, or an elusive presence.

Symbols of fecundity and gentleness through the rain they hold, clouds reflect the magic of the world, the transience of all things and the hope of a future always possible carried by the continuity of the lives of women and men. Zinkpè carved his cloud with a knife, giving birth to a multitude of intertwined lives represented by these small wooden statuettes, as much identical as they are different. They represent twinship, this imperfect double, this exception of life which allows women to give birth to two children, creating in fact, a most particular interspace. Celebrated across borders in Benin, Nigeria, Togo and Ghana, Zinkpè pays tribute to the creation of life and the invisible and magical ties that interweave the world.

Through his fever, Zinkpè transmits. 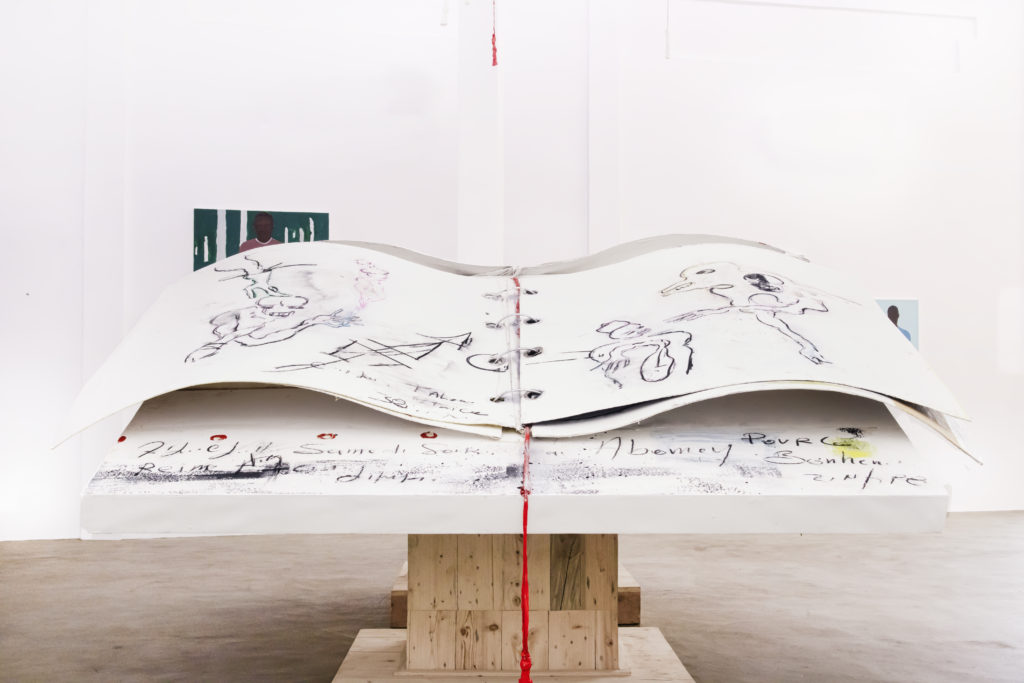 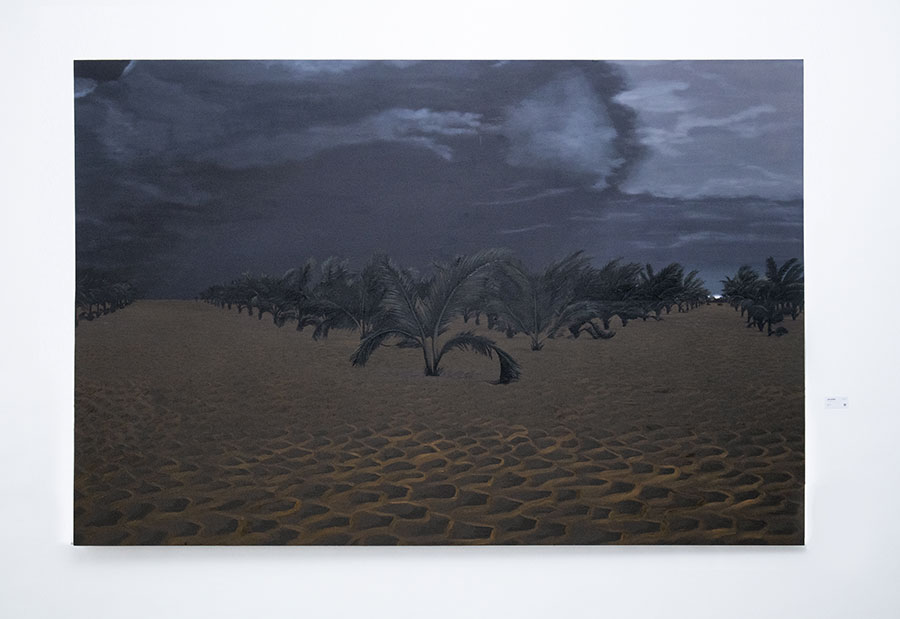 Joël Degbo, in residence in Benin at Zinkpè’s studio, proposes a new series devoted to the Beninese cityscape. Through painting, but also video and installation, Joël addresses the question of the history of territories, spaces in mutation and their heritage, especially of places discredited, abandoned or forcibly displaced. He seeks to write their memory.

In doing so, Joël’s personal history seeps into his works; his double heritage, his multiple Franco-Beninese identity, gives him this sensation of partial belonging – notably in the painting Palmier au milieu d’un jardin villepintois (Palm Tree in the Middle of a Garden in Villepinte) from his series on the Parisian inner city. Like a self-portrait, this palm tree, implanted elsewhere, symbolizes this feeling of exteriority.

In Cotonou, Joël crossed the path of the new palm grove welcoming residents at the entrance to Fidjrossè where once stood an entire neighborhood. These short palm trees, recently planted, have replaced lives, in the name of a new city, of a new hope. In painting these palm groves, Joel moves from self-portrait to portrait. His journey to Benin, his land of origin, his reconnection with his identity allowed him this transfer. This homecoming is translated by this connection to these displaced lives. His reconstruction coincides with that of this invisible neighborhood to
which he pays homage, the portrait of all these lives that cement an intangible heritage for this space at first sight seemingly deserted. 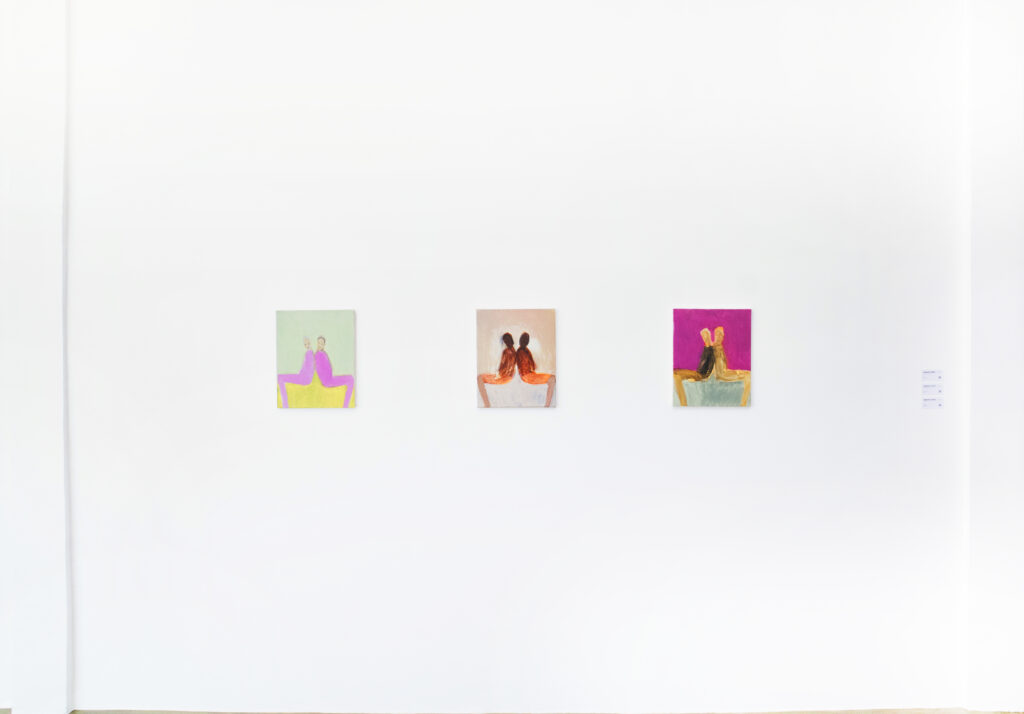 Gregory Olympio, in order to describe his will to free women and men from their identities, invents new ones. His double portraits refer to all and no one at once, they are imaginary beings created from real or fabricated memories. Nothing more is said about the relationship of these two characters. The space, between them, suggests. It leaves room for the possible. Their area of contact specifies a little, without saying too much. Are they related, lovers, brothers or neighbors, or simply co-existing? Gregory does not elaborate, he refuses to confine. The contours are never clear, always attentive
to one color or another. 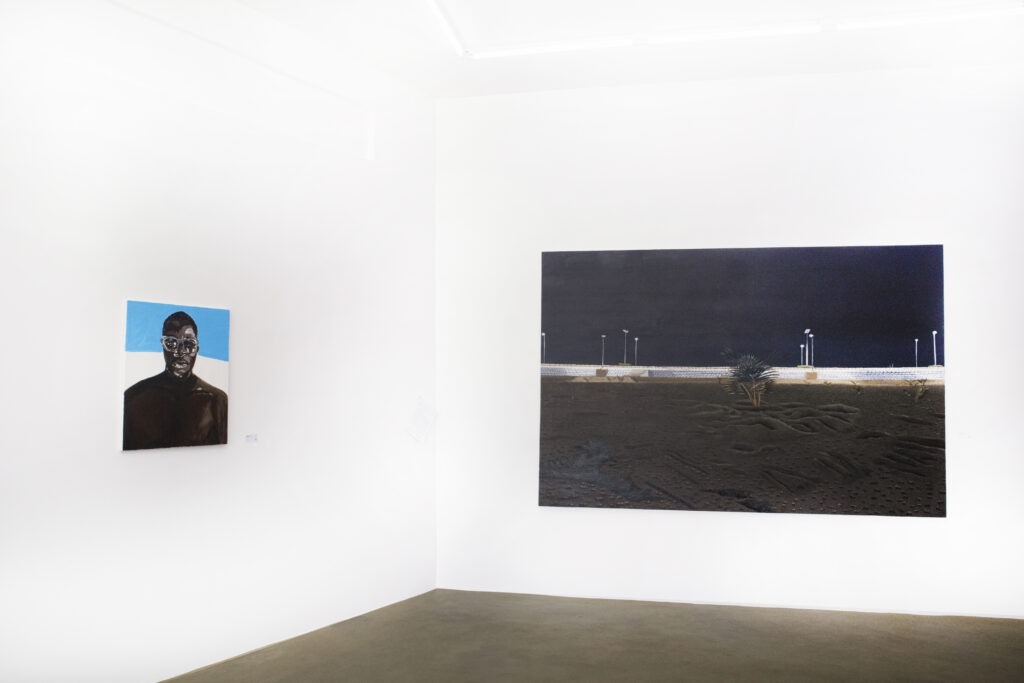 Didier Viodé has chosen to question himself. In this series, he has devoted himself to an introspective work. What better way to explore the subtlety of existence than to question his own identity. Regarder le monde (Looking at the World), is for Didier the moment to rest an eye on his inner path, it is an autobiographical introspection which gives form to images and gestures of his life, his parents, his childhood, his beliefs. He lays bare his intimacy to reveal himself beyond his own body. He speaks of his journey and his detours. The portraits without faces preserve a certain modesty, he reveals himself without confiding in us the details.